The Dark Season
by Rana Eros

Thanks to Rune and Eliza for beta duty and for helping me name this puppy. My penchant for introducing myself to a new fandom by writing deathfic still seems in place. The soundtrack for this story was, bizarrely enough, The Smashing Pumpkins' cover of "Landslide" and Sunscream's "Love U More." I blame Goku. This was written for the A Picture is Worth 1000 Words Challenge. The picture I was given: 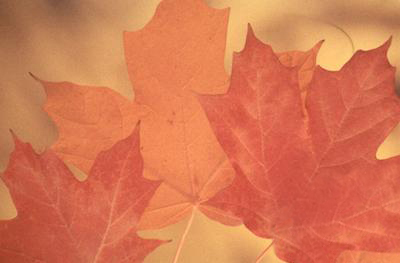 Goku thinks he remembers this. There's a sense the world has ended, and his body's too stupid to stop breathing, to stop moving and feeling and listening. To stop waiting for Sanzo to wake up, though he knows that's not going to happen this time.

His temples throb, the crown cuts into his brow, but he will not lose control. Not yet. There are things to be taken care of first.

Kougaiji and his followers offer assistance, but do not press when he asks only to build a pyre of what's left of the estate. He burns Gojyo and Hakkai together first, lets their ashes scatter on the wind. Hakuryuu flies into it, keening loudly in Goku's silence. He thinks Hakuryuu will leave him, but the dragon comes back and settles on a branch while he rebuilds the pyre and moves Sanzo's body into place. Hakuryuu's landing shakes the three red leaves at the end of the branch; autumn has come again.

As he burns his sun, he wonders if he will ever see another spring.

He gathers Sanzo's ashes, carries them to the river where he flicks them out in a long, wide arc. He considers throwing his crown in after them, but Kougaiji fought on their side at the end. He won't unleash himself on one who did his best to keep Sanzo alive.

He can wait until he's farther from Kougaiji's lands.

When he returns from the river, Kougaiji waits for him with a satchel. It looks like something a monk would wear; a monk not Sanzo.

"These are the sutras," Kougaiji says. "Somehow, they all survived."

Goku stares at the satchel a long time. He wants to ask, "What do you want me to do with them?" But he knows. He's the last of the Sanzo-ikkou alive, and the journey is not finished.

He takes the satchel and hefts it over one shoulder. The sutras are weighted like his crown, power and obligation. He will wear both a little longer, long enough to carry the sutras to the Sanbutsushin and fulfill Sanzo's obligation to them. There will be other Sanzos, after all--

"Goku?" Kougaiji's voice sounds concerned and far away. Goku realizes he is staring at the leaves on the branch where Hakuryuu perched. The phrase "other Sanzos" echoes in his head, and again he thinks he remembers something that makes him want to sit down beneath the tree and wait. Except he thinks the tree will be gone before he is done waiting.

"Be careful," he says, and meets Kougaiji's eyes.

He walks away from the dying sun, into the darkening night.

Hakuryuu goes with him. Sometimes dragon becomes jeep and Goku drives. It's one of the last things Hakkai taught him. He prefers walking; there's too much space in the jeep and too much silence. When he walks, he tells himself he's going to meet the others in a while.

He thinks of leaves, and believes it.

He sleeps near rivers, streams, and the water carries him dreams of Sanzo and Gojyo and Hakkai, though they don't always look like themselves. He wakes and makes himself hunt food. He's never hungry anymore. Or maybe it's just that he knows it's going to be a long wait for what he's craving.

It takes a year to return to the East. There are no assassins after the sutras, but there are still gangs of youkai who like terrorizing humans, even with their minds restored, and humans with scores to settle. The first time he fights alone, Goku is worried he will not be able to defeat his opponents while wearing his crown, but taking them down is almost laughably easy.

Except, of course, that there is no one to laugh with anymore.

Kanzeon waits for him on the steps of Chang'An.

"So you finished the mission after all," se drawls, "and you're still wearing your limiter."

Goku has a good idea of what Sanzo would say to hir, but he only pushes past, fist tight on the strap of the satchel, the sutras almost humming with their proximity to the Sanbutsushin.

From very far away, he hears the satchel fall to the ground, he hears the water rushing past the temple, and he remembers. Nataku, his friend. Kenren. Tenpou.

"He was your nephew," he says without turning around. "And you didn't even try to save him."

"He would be the first to tell you no one could save him but himself."

There's a long silence before Kanzeon says, "And now you and I and all of Heaven wait."

The satchel sits at his feet. The sutras are in the temple. He decides that's good enough. He turns to face Kanzeon, and raises his chin.

It's easier to track the years on the mountain when he's not caged; Kanzeon would doubtless consider that mercy. He stops counting after fifty. He knows it's spring when he feels the presence of other people and three figures crest the rise just below the tree in which he's perched. Hakuryuu leaves off the game of fluttering just beyond his reach to fly down and coo greeting at them, curling around the neck of the shorter one with dark hair. The taller one stumbles on a rock and swears loudly. The blond just scowls, tilts his head to fix Goku with hard violet eyes.

"You can shut up now. We're here, and you're giving me a headache."

Goku grins and swings down out of the tree. He straightens, pauses as he towers over this new sun. It might make protecting him easier; there's no question Goku will protect him.

"I'm hungry," Goku says by way of greeting. What he means is that he's starving, and here at last is the feast he's been waiting for.